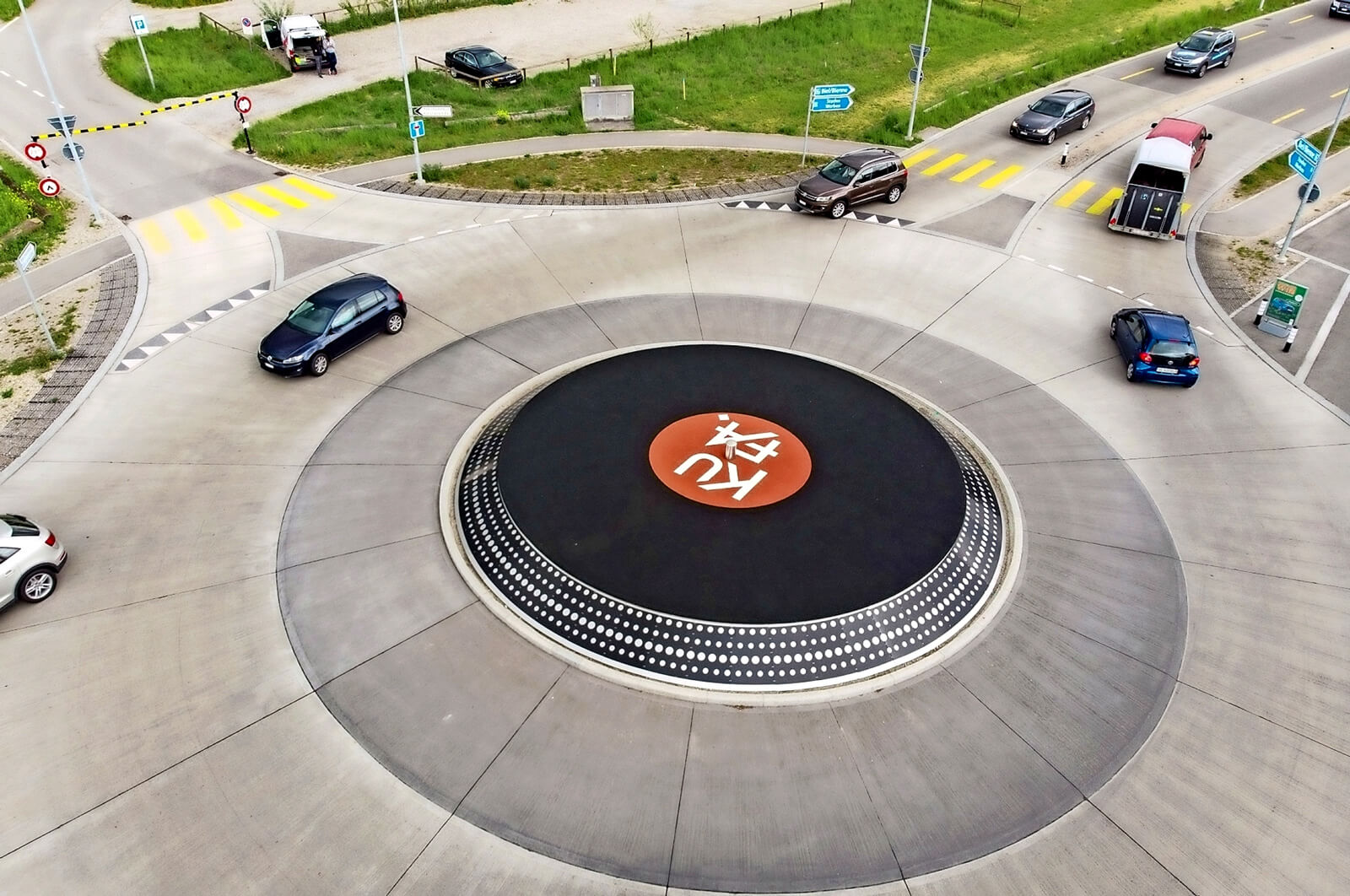 Switzerland's flag may be square, but its streets are dotted by roundabouts.

About as common as station clocks, every town has at least one. And since the public is often involved in designing these traffic circles, we have seen horrible things... Think horizontal steel pipes or piles of rock.

But all is not lost, as the town of Lyss near Bern is proving. Those who swing by will undoubtedly hit the latest roundabout. And given its decor, does it surprise that the KUFA Kreisel has gone viral?

This roundabout in Switzerland is a giant vinyl turntable.

It doesn’t actually spin or produce any sounds. Heck, it is missing a tonearm! Even though, the traffic circle in Lyss is quite an eye-catcher...

Credits go to the Bern civil engineering department which had commissioned the roundabout.

The KUFA Kreisel is located at a freeway entrance near a popular cultural venue called Kulturfabrik. Its club is host to frequent parties, but the KUFA also offers flea markets, pub quizzes and cultural events.

It made sense for the creative folks at KUFA to be in charge of designing their roundabout. And after years of planning, the traffic circle was completed in May 2019.

Personally, I love the idea of a turntable with a branded vinyl record.

The roundabout has a total diameter of 12 meters, with the record alone being 10 meters. Attached to its side are 800 silver metal washers. According to a person involved, the initial idea was to install a cargo container featuring graffiti art. Another idea was to place an oversized microphone in the center.

From there, the idea of a record player was not too far. But given the roundabout’s circular shape, it made more sense to design a gigantic turntable.

So there you have it: a great reason to swing by the town of Lyss between Biel and Bern. Give this traffic circle a spin before leaving the roundabout for a concert at the KUFA...

While you're at it, check out Switzerland's record player stamp!

What about this experimental clip? I love it!

There is more to Switzerland's movie ties than Ursula Andress and those magnificent, breathtaking locations. Switzerland and Hollywood have... How much do you know about Swiss watches? Take our new quiz.

The year 2017 marked the centenary of Baselworld, the world's largest watchmaking exhibition. Every year, watch and jewelry enthusiasts, flock to Basel...

Let's "square" away the most interesting fact about the Swiss flag: it's the only national flag that's square instead of rectangular!